Will Rogers Memorial Center’s Pioneer Tower was recommended as one of four locations in Fort Worth for “destination quality, iconic public artworks from nationally and internationally-recognized artists” in the Fort Worth Public Art Master Plan Update, adopted by City Council in 2017.

By early 2018, the City of Fort Worth’s plans to rehabilitate the Pioneer Tower, built in 1936 and listed on the National Register of History Places, were underway.  This project offered an excellent opportunity to begin work on the City’s first iconic public art project.  In April 2018, the Fort Worth Art Commission’s recommended approach to for the project was presented to City Council, namely, projection mapping video artworks formatted to fit the unique architecture of Pioneer Tower by utilizing a 3D scan of the structure.

In June 2018, the City contracted with local artists and co-founders of Dallas Aurora (www.dallasaurora.com), Joshua King (JTK Studios LLC) and Shane Pennington (SP Studio LLC) as planning consultants based on their decade-long experience presenting visionary artists’ work to the North Texas community at the AURORA Biennial.  For the Pioneer Tower Iconic Public Art Project, King and Pennington worked with the City of Fort Worth’s architectural consultant to specify art infrastructure, including electric and data connections on all four sides of the tower to support powerful video projection equipment.  In addition, they produced a 3D scan of the tower that the commissioned artists would use to format their projection mapping video artworks.

In November 2018, Council Member Dennis Shingleton appointed the Pioneer Tower Project Core Team composed of Cultural District and community stakeholders to provide input throughout the course of the project.  In April 2019, King and Pennington guided their appointed Curatorial Committee through a process that led to the selection of New York-based new media curator DooEun Choi. 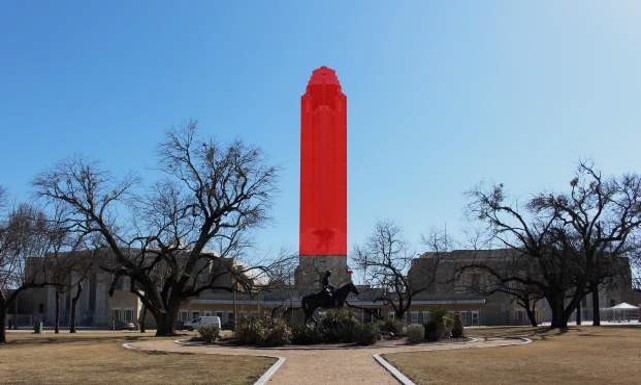 Pioneer Tower as a 4-sided “canvas” for projection mapping videos

On September 25, 2019, DooEun Choi participated in the Public Art in Fort Worth panel discussion, sponsored by KERA Art&Seek and moderated by Jerome Weeks at the Kimbell Art Museum where she discussed her approach to the Pioneer Tower project.  On the following day, she presented a selection of internationally renowned new media artists to the Pioneer Tower Project Core Team for consideration.  They recommended that both Quayola (Quayola.com) and Refik Anadol (RefikAnadol.com) be invited to prepare proposals for the project. The Fort Worth Art Commission concurred with their recommendation on October 7, 2019.

In January 2020, Ms. Choi arranged for she and artists Refik Anadol and Quayola to meet in Fort Worth to visit Pioneer Tower, visit various museums and other sites around Fort Worth, meet with potential institutional partners, and attend opening night of the Fort Worth Rodeo in the new Dickies Arena.

On May 11, 2020, both artists presented their exciting proposals to the Fort Worth Art Commission.  On June 23, 2020, City Council acted on the Art Commission’s recommendations by authorizing Artwork Commission Agreements with Quayola Ltd and Refik Anadol Studio, LLC, for Pioneer Tower.  The artists immediately began gathering large data sets from images and locations in Fort Worth to to developing their artworks by using cutting-edge technology to interpret Fort Worth’s natural beauty, rich diversity, and storied history.

Curator DooEun Choi has been assisting with aspects of the artists’ productions and has coordinated their technological requirements with planning consultants Joshua King and Shane Pennington.   A projection test was conducted on May 18-19, 2021 in preparation for the premiere of Pioneer Tower Dreams by Refik Anadol and Texas Surveys by Quayola on August 20-21, 2021 at Will Rogers Memorial Center the Fort Worth’s Cultural District.

This first-of-its-kind event will celebrate Fort Worth’s collective memories and natural beauty in a big way through the marriage of art and cutting-edge technology by two of the most prominent new media artists in the world today. 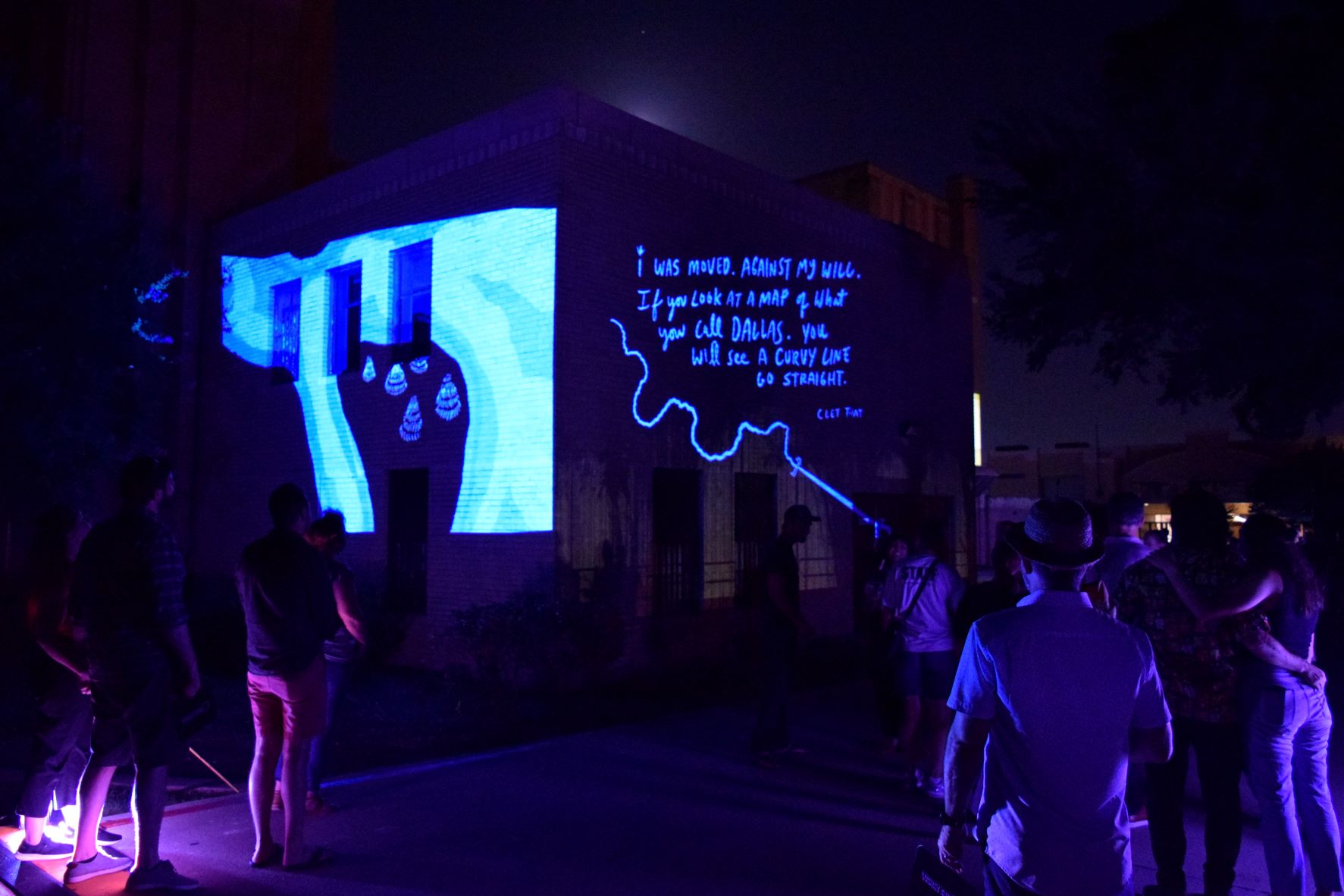 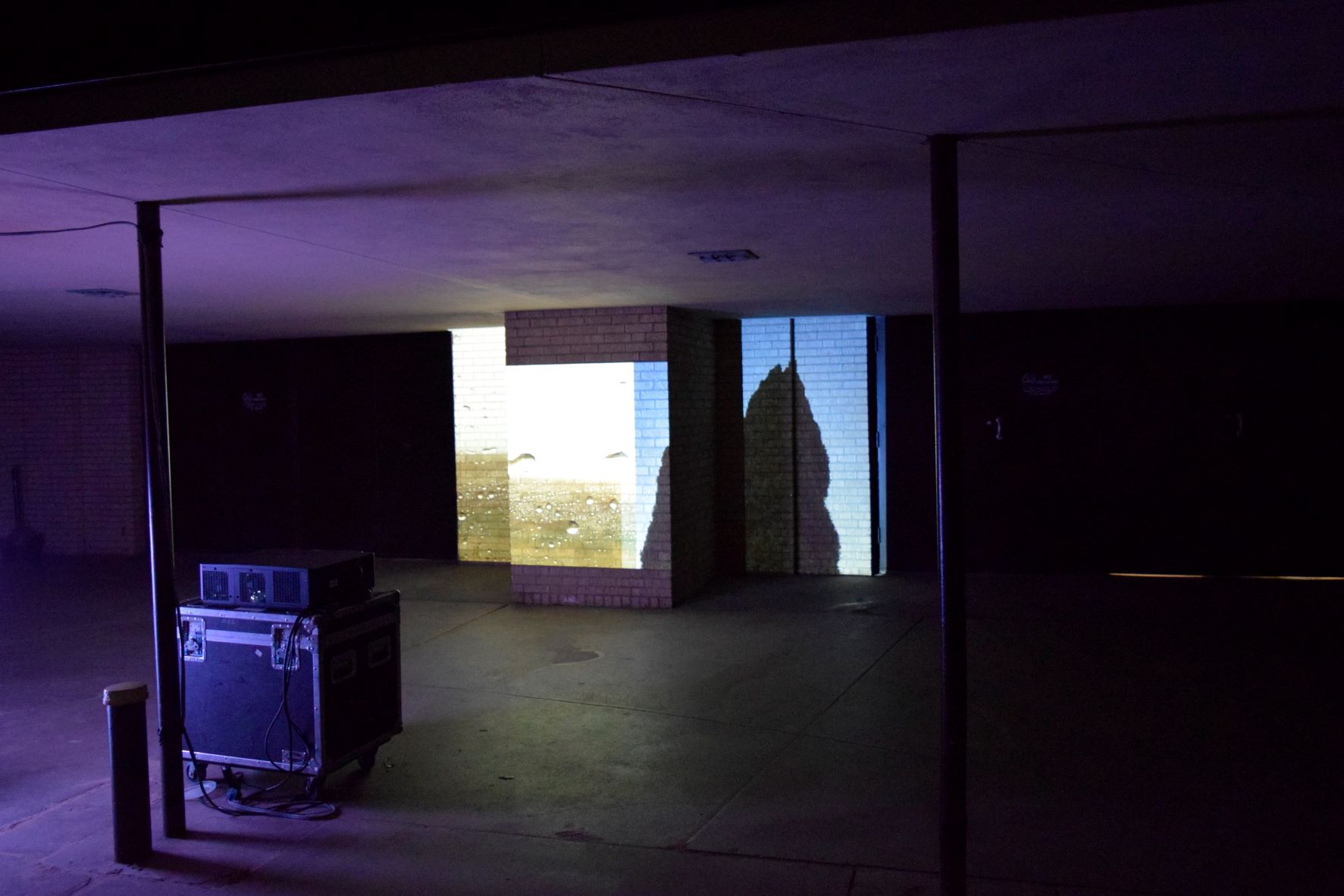 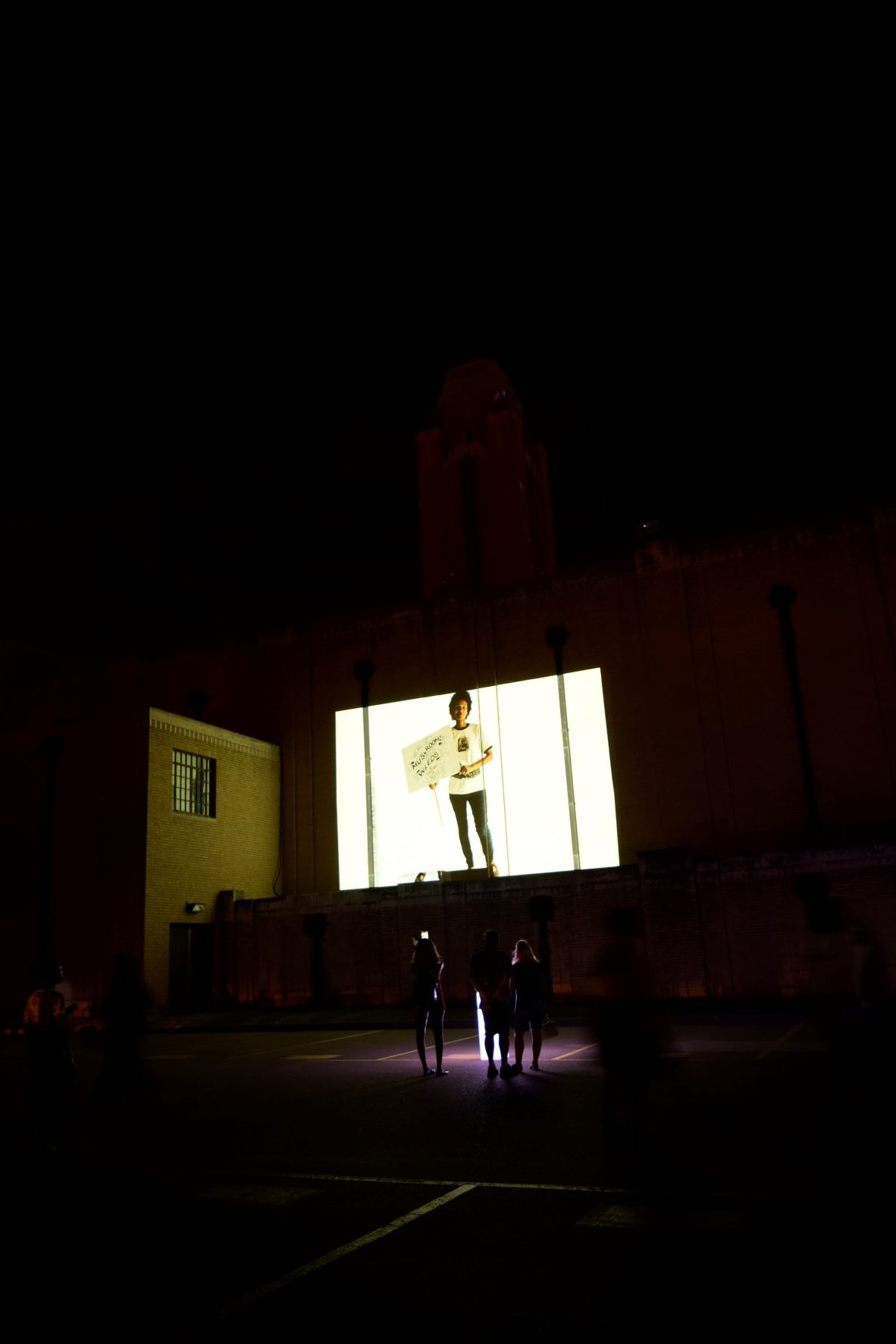 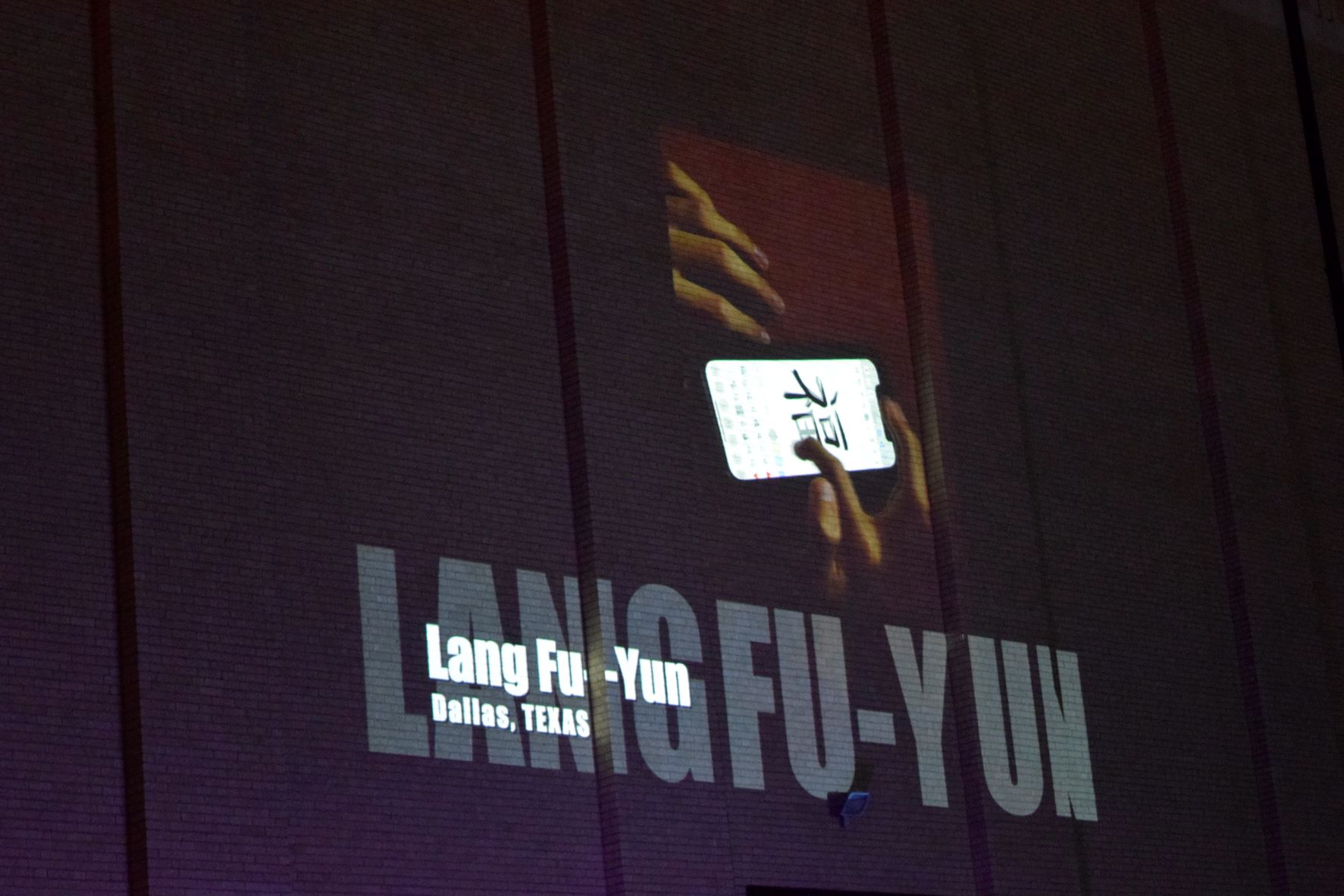 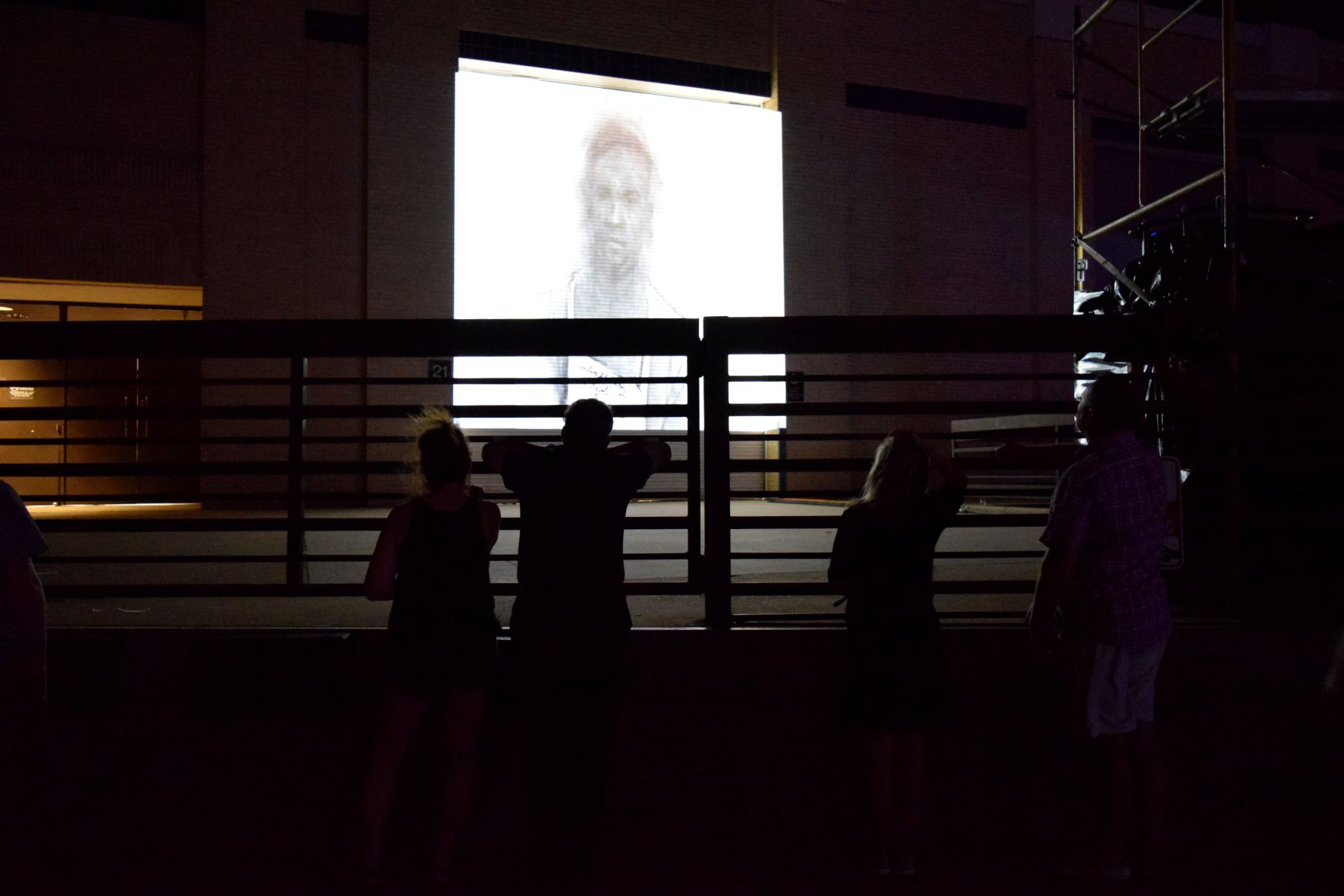 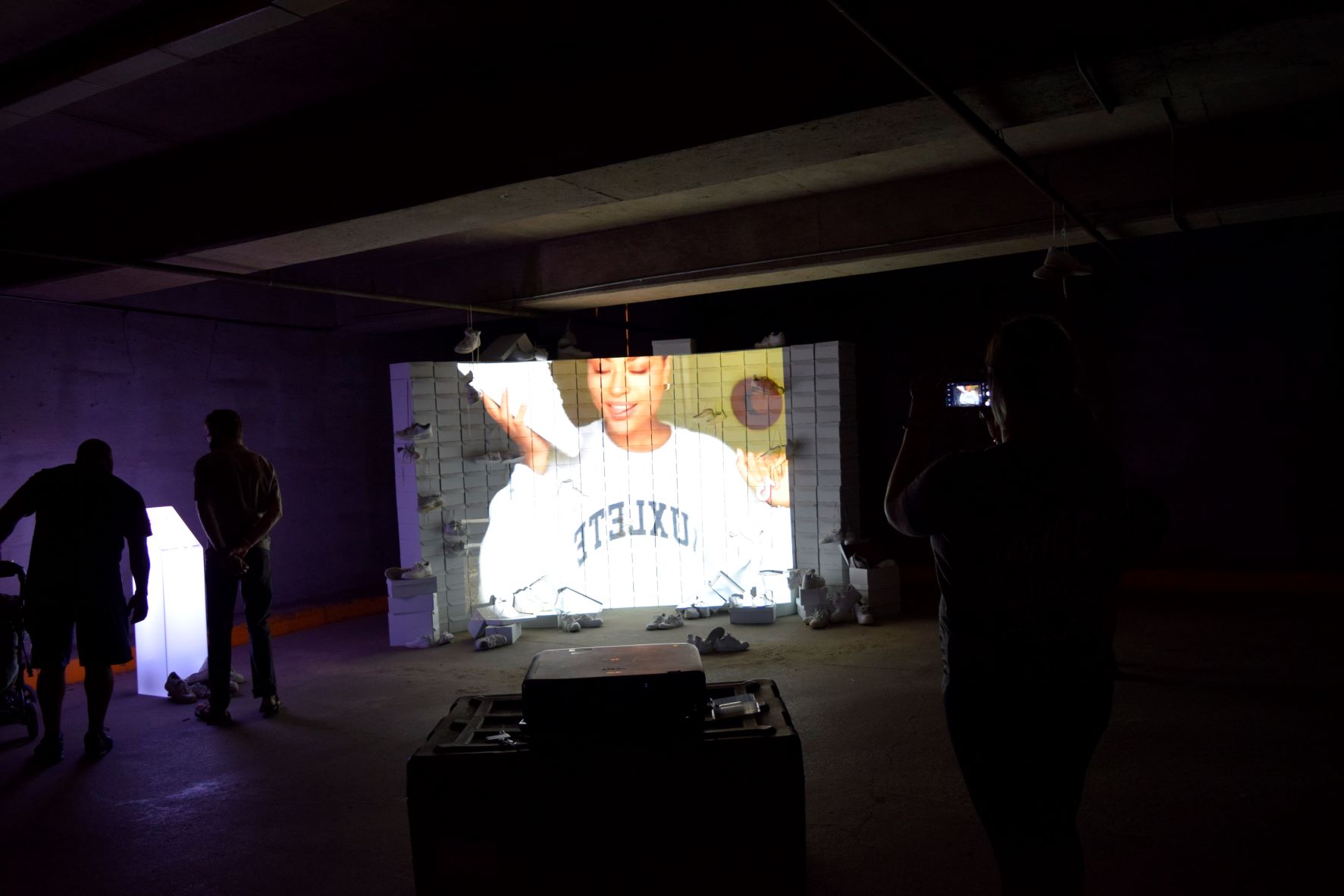 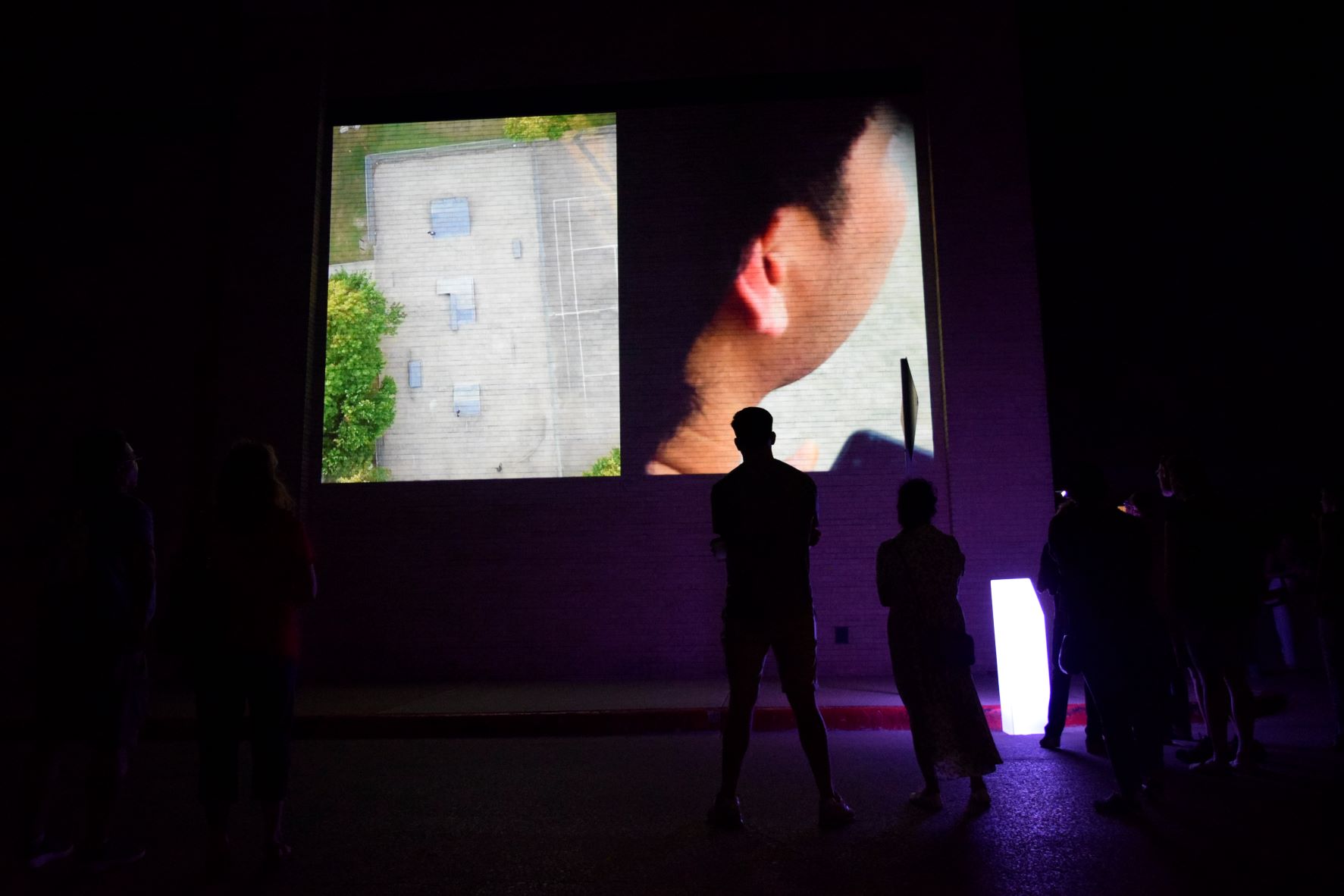 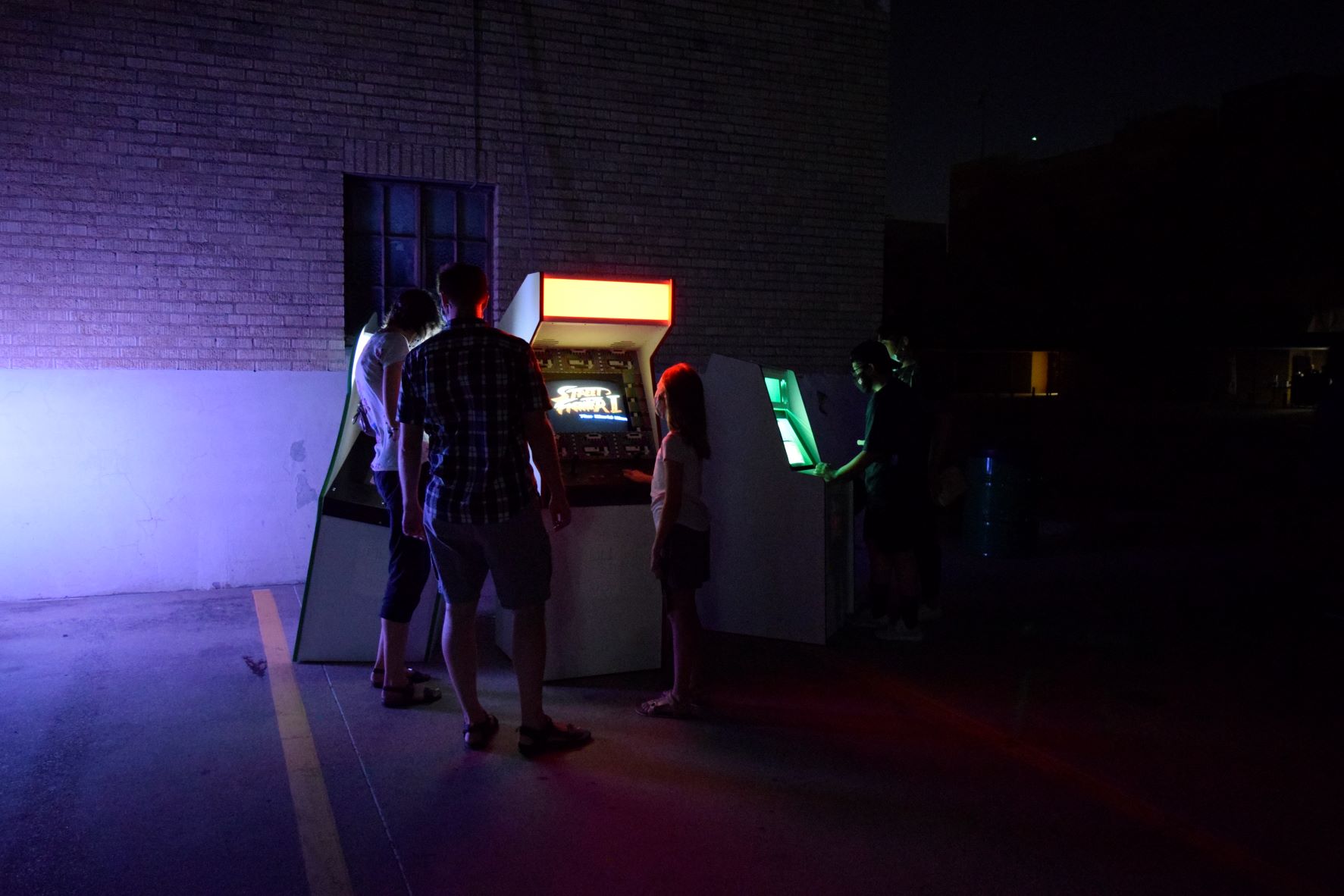 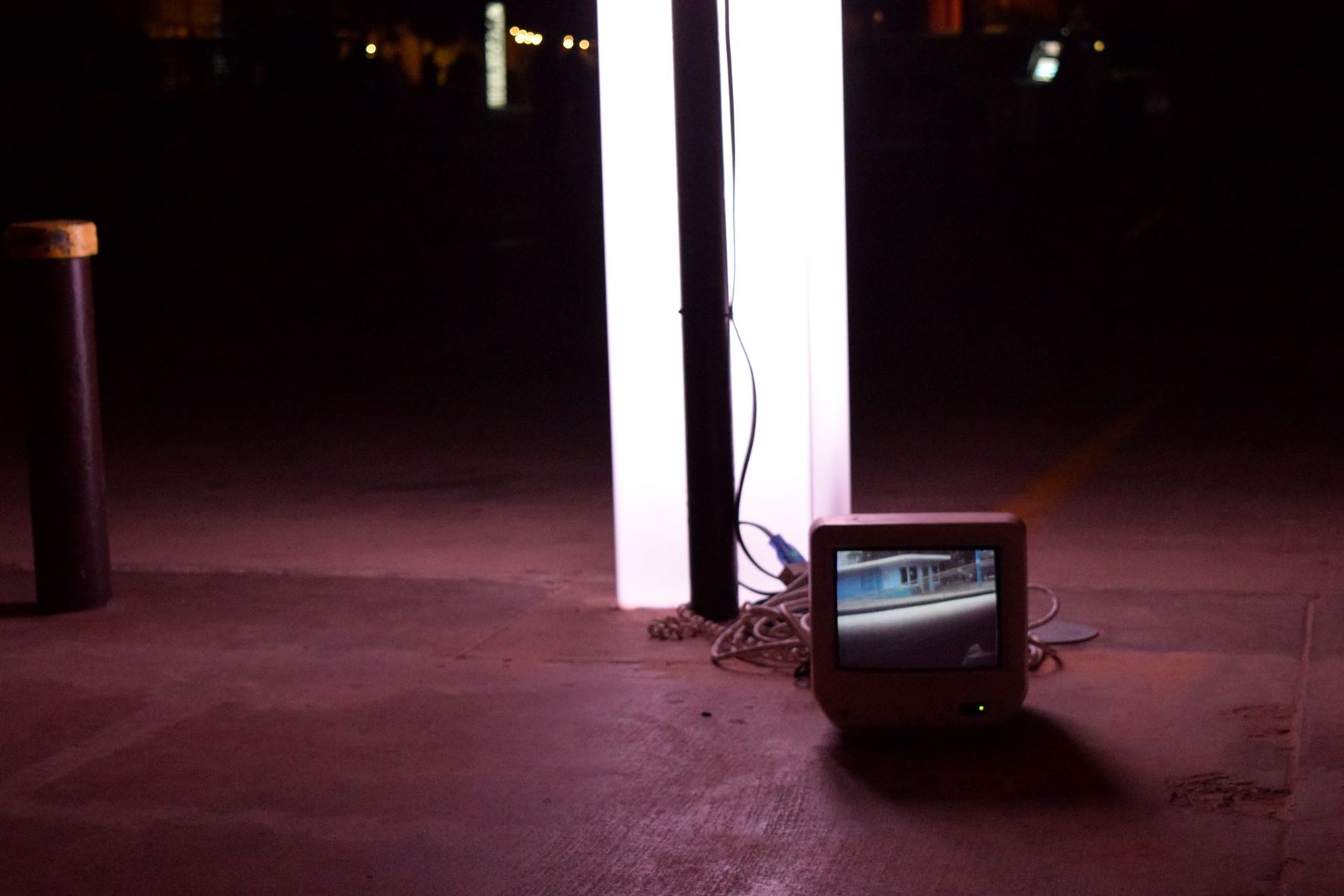 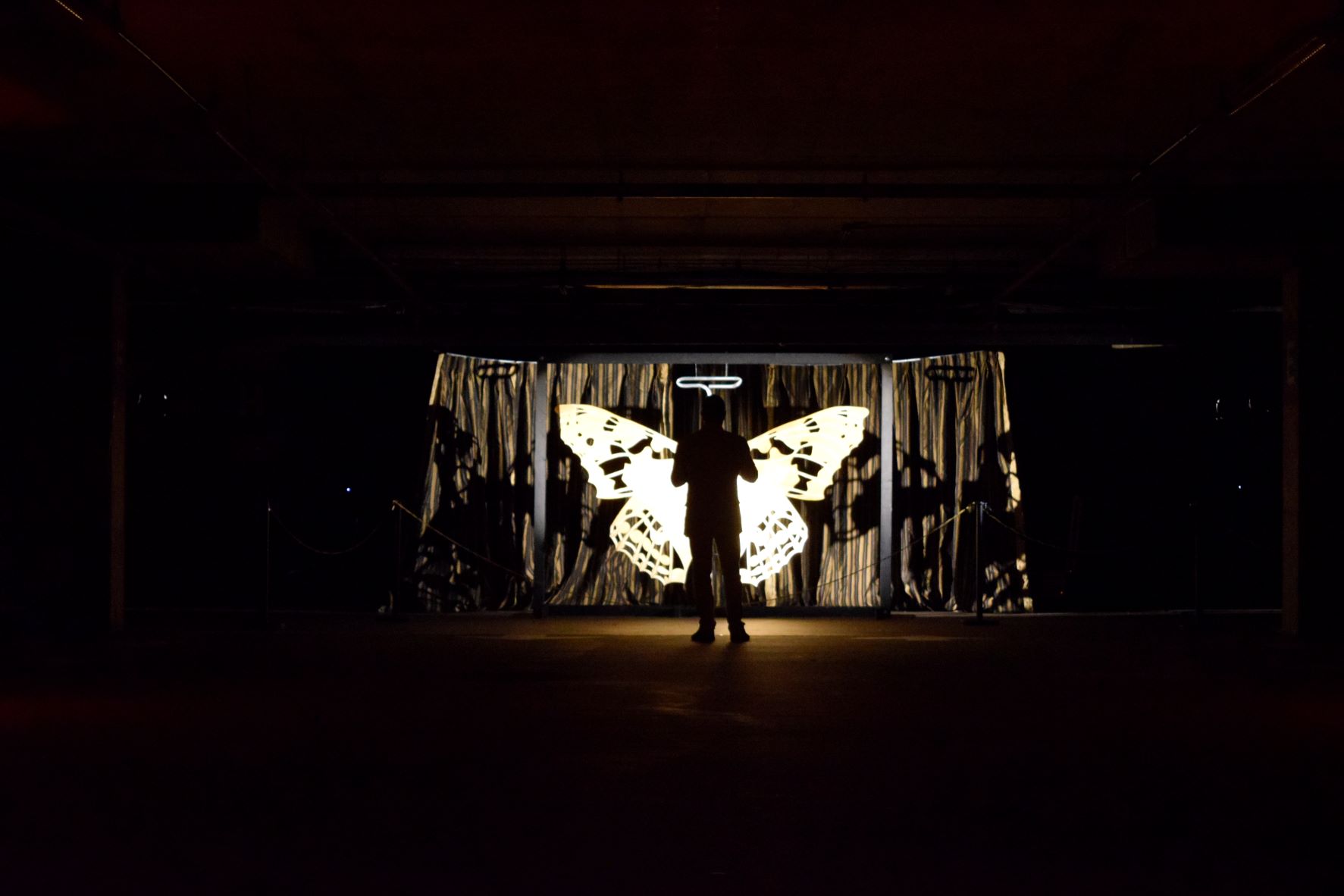 The Arts Council of Fort Worth and AURORA partnered to present New Stories: New Futures in conjunction with Fort Worth Public Art’s major installation on Pioneer Tower, curated by DooEun Choi, featuring international artists Refik Anadol and Quayola. Dr. Lauren Cross, curator of the exhibition at the base of Pioneer Tower, selected an impressive roster of ten North Texas artists working with a wide range of new media approaches for their art installations that were debuted to the public on August 20, 2021.

The Arts Council, in partnership with AURORA, is excited to welcome the entire community to the Cultural District to experience the Pioneer Tower premier alongside works of talented and diverse local and regional artists. – Karen Wiley, President & CEO, Arts Council of Fort Worth

This exhibition curated by Dr. Lauren Cross is a uniquely Fort Worth art exhibition featuring the historical and modern perspectives, stories, and memories from the region. Each of the artists’ pieces highlights unfamiliar and distinct narratives around the collective experiences of North Texans that are in dialogue with the video installation on Pioneer Tower by Refik Anadol and Quayola, which explore memories of Fort Worth and the region’s natural beauty.