Lauren Cross is an interdisciplinary artist/filmmaker, curator, and scholar whose work has been screened and exhibited across the country. Cross earned her BA (2006′) in Art, Design, and Media from Richmond, the American International University in London, England, and her MFA (2010′) in Visual Arts from Lesley University in Cambridge, MA. She has a Ph.D in Multicultural Women’s and Gender Studies from Texas Woman’s University in Denton, TX (2017′).

Cross’ feature film, The Skin Quilt Project, was an official selection for the 2010 International Black Women’s Film Festival in Berkeley, CA and screened at various museums, universities/colleges, and community organizations across the country. She is a passionate advocate for diversity in the arts, and has written and contributed research in fields of women’s studies, visual studies, and multicultural studies. In 2013, Cross was among three Fort Worth artists selected for the 2013 Fort Worth Weekly Visionary Awards.

New Stories, New Futures is the culmination of a culturally interrelated approach and is especially celebratory of the artists I have come to know both in Fort Worth and within the North Texas region. The featured artists share stories in their work of people, themselves, and experiences that are often hidden or overlooked.– Dr. Lauren Cross, Curator New Stories: New Futures 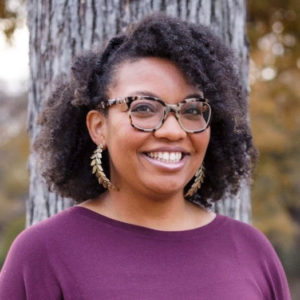